Are You Getting Enough Fibre Optic? 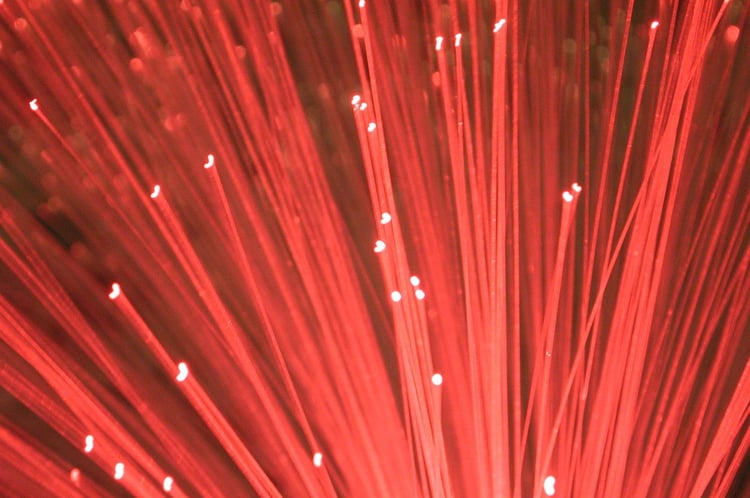 For years our mothers have been telling us how important a steady supply of fibre is good for us, and how right she was.

But which fibre is right for you?

Straight away we can eliminate OM1 and OM2 from consideration. I haven’t installed OM1 and OM2 fibres within the last 10 years.

So what’s the difference between multimode and single mode?

Basically, contrary to what I’ve been told for years size does matter, but in this case, the smaller, the better. OM3 and OM4 fibre cables are made up of three main parts, the buffer, the cladding and the core.

The core of an OM3 and OM4 cable is 50 microns in diameter (1 micron is one millionth of a metre). The outer cladding measures 125 microns in diameter, this keeps the light from escaping the core. The buffer offers protection to the cladding from moisture and physical damage.

Single mode fibre optic cables use the same method with the exception of the inner core, instead of 50 microns in diameter, it has an impressively small diameter of just 9 microns.

But how can this be better?

In multimode fibres the beams of light reflect and bounce off of the cladding throughout their journey from source to end.

In a single mode fibre cable the light travels a faster and more efficient route, thus can deliver faster speeds over greater distances.

So why even bother with multimode fibre cables at all?

Strangely single mode fibre cable is cheaper to buy than multimode fibre cable. It installs and terminates the same way so labour costs are identical.

However, when it comes to purchasing the SFP’s (small form-factor pluggable transceivers) the LX (long wave) SFP’s are considerably more expensive than the SX (short wave) SFP’s.

In an ideal world, with unlimited budgets, singlemode fibre cable would be installed everywhere, ready to take on the speeds and traffic of whatever the future throws at us. We have implemented this to a few sites over the last few years, ranging from schools to airports.

The three key things to consider for your network when deciding on your fibre requirements are:-

Now you’ve decided what type of fibre you want installed, you now need to decide a few more factors, such as how many cores of fibre you need?

Ranging from four to 24 cores, you only need two cores to make a connection work. One core for transmitting (TX) and the second core for receiving (RX), but it always pays to have some backup cores for future expansion, or other services such CCTV and secondary networks.

Next would be what connector style you prefer, the most common being ST (the round one) SC (the square one) or LC (the same as your SFP connector).

Why We Still Use Copper Wires?