LAN3 is an end-to-end networking and cyber-security company. A key part of our strategy is to ensure we offer the tools for a our customer to better understand their security vulnerabilities. Software and algorithms can do a better job at penetration testing and help businesses continually assess and improve their cyber risks using the threat-oriented approach. Cloud Voice.

Pcysys is recognised as a leader and an innovator in the space of pen' testing automation. Pcysys utilise pioneering algorithms, which mimic hackers’ best practices and methods, to penetrate through and around corporate defenses. 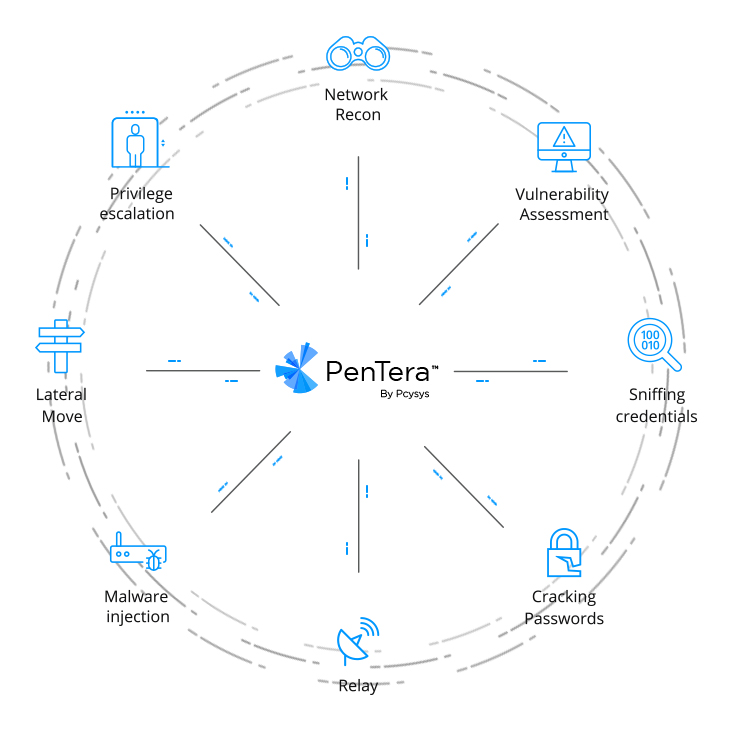 Traditionally, penetration testing has been done manually by service firms, deploying expensive labour to uncover hidden vulnerabilities, producing lengthy reports, with little transparency along the way.
Professional services-based penetration testing, as we know it today, is time consuming, intrusive, costly, represents a point in time snapshot, and cannot comply with the need for continuous security validation within a dynamic IT environment.

Pcysys’ automated penetration-testing platform mimics the hacker’s attack - automating the discovery of vulnerabilities and performing ethical exploits, while ensuring an undisrupted network operation. Detailed reports are produced together with proposed remediations, one step ahead of tomorrow’s malicious hacker.

Press ‘Play’ and get busy doing other things while the penetration test progresses. All you need to do is define a range of IPs and check
the type of tests you want to perform.

The Pcysys software is locally installed on your network effectively securing your vulnerabilities from the internet and the outside world. The software requires standard hardware and installation only takes a few hours, at the end of which the entire functionality is accessible to you in any environment.

A global shortage of information security professionals and the increase in cyber threat sophistication drives the need for automated penetration testing software. Pcysys improve the way organisations validate their cybersecurity risk, by delivering the most sophisticated, continuous and cost-effective penetration testing platform.

Because networks, users, devices and applications constantly change and expose vulnerabilities, it is critical to pen-test continually. Pcysys allows you to validate your cybersecurity posture as often as you need, keeping your guard up at all times.

Credential sniffing and password cracking is available in all run types, black-box & grey-box. This feature provides visibility of the password robustness across the enterprise and inbuilt remediation guidance provides information on how to implement improvementsand retest.

Flexibility to run tests on third party infrastructure as well as on internal change events.

PenTera can test for numerous misconfigurations within your AD, which would increase overall risk